Walk in, walk out… vasectomies? 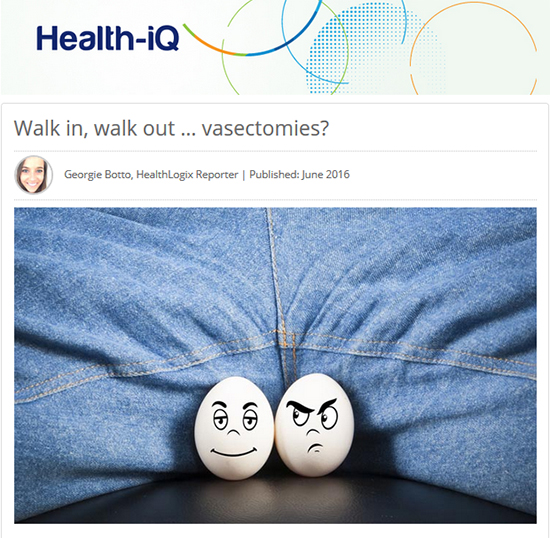 Heard of walk in, walk out vasectomies and wondered if the process is really that simple?

It’s said to be relatively painless, and only require 10 minutes at the doctor’s office.

HealthLogix: Firstly, what is a vasectomy?

Dr Katz: Vasectomy is a surgical operation that cuts the tubes that carry the sperm from the testes. The goal of a vasectomy is to make a man sterile, that is unable to father children naturally. It is a very effective, safe and permanent form of contraception, [and] does not interfere with a man’s libido, ability to get an erection, or ejaculate (although the semen will not have any sperm in it).

HealthLogix: Can vasectomies really be a walk in, walk out procedure?

Dr Katz: With the right training, set up and equipment it can be done as a walk in, walk out procedure. But in saying that, you don’t necessarily walk out and go straight back to work. It’s normal to have a little bit of discomfort for at least a few days. Most guys need to take a day or two off work.

Most urologists perform it in an operating theatre environment, so if there are unexpected issues (which are very uncommon) they can be dealt with. I always give my patients a choice, but GPs who perform vasectomies won’t offer you that option because most aren’t accredited to work in hospitals as they’re not qualified surgeons.

HealthLogix: Are walk in, walk out procedures riskier?

Dr Katz: I’m not aware of any published negative outcomes from walk in, walk out procedures, but an operative environment is more controlled, as on the rare chance that something goes wrong, it is much easier to deal with. That said, someone who is well trained in vasectomies can do it well under local, general anaesthetic or sedation. Therefore, after an informed discussion with patients about the pros and cons of each – ultimately the patient chooses.

The real question is: Are they well trained? When you see a urologist who’s undergone at least eight years of specialised training in surgery of the genital region after medical school, you know they’ve got the credentials to do the operation. If you visit a GP, the training and experience is unknown. So my advice to men considering a vasectomy is to ask about the doctor’s training and experience.

HealthLogix: Who are vasectomies suitable for?

Dr Katz: The best candidates are in a stable relationship, have completed their family, their wife [or partner] has been consulted and both parties are happy to go ahead. It’s a very useful form of contraception for men that have completed a family. It’s 99 per cent effective, which is as good as you’re going to get.

Vasectomy may not be right for you if you are relatively young and don’t have any children, you aren’t in a relationship or you’ve recently separated or divorced, or if you’re having relationship or marriage problems.

HealthLogix: If men aren’t sure about vasectomies, what should they do?

Dr Katz: It’s a completely elective procedure. No one ‘needs’ a vasectomy. And, while it can be reversed, it shouldn’t be thought of that way. It should be considered a permanent solution – permanent contraception. Patients need to be fully comfortable with that decision.

I give patients a handout and ask them to think about it, write down their questions and then come back for another chat. I want them to take their time, have a discussion with their wife or a friend and then come and revisit it when they’re ready. If they don’t want to go ahead, that’s fine. This is preferable to patients making a rushed decision and then deciding to cancel within the last week or two after having second thoughts.

HealthLogix: What if men change their mind after the vasectomy?

All we can do as specialist surgeons is to give patients as much information as we can … but in the end we don’t have a crystal ball, so inevitably, some men will regret having had a vasectomy in the future for various reasons.

It’s important to note that 60 to 90 per cent of vasectomy reversals are successful at returning sperm to the ejaculate, however, only 40 to 70 per cent of couples go on to achieve pregnancy over the next two to three years of regular sex.

HealthLogix: What tips would you give to men considering the procedure?