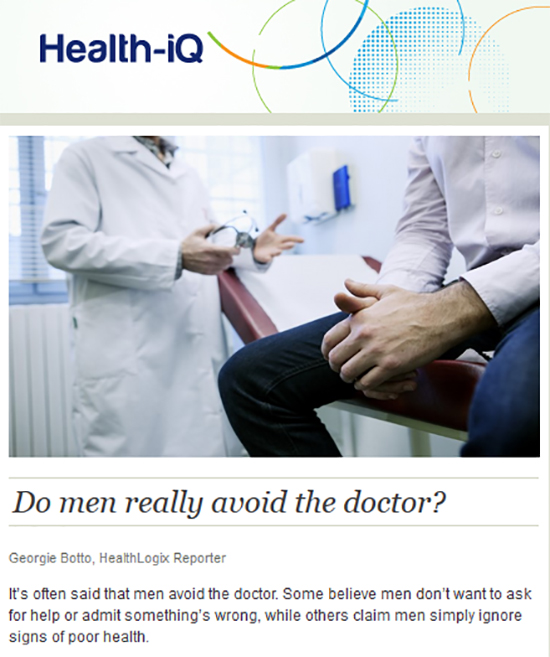 However, Professor John MacDonald, Director of the Men’s Health Information and Resource Centre at Western Sydney University, doesn’t believe men are avoiding the doctor en masse. And statistics back him up – at least when it comes to Australia.

Indeed, 76 per cent of men visited a GP in 2013 to 2014, according to the Australian Bureau of Statistics, meaning only about a quarter of Aussie men might be avoiding the doctor.

By contrast, 87 per cent of women visited a doctor in the same period – a somewhat higher figure.

So, what’s the reason for this gender gap?

A lack of “male-friendly” doctors’ clinics was one issue all our experts cited when suggesting reasons men mightn’t visit their GP.

“At my doctor, the only poster related to men said, ‘If he beats you, phone this number’. As a man, I’m not going to hurry back there.

“We always blame men for not attending the doctor, but it takes two to tango. Instead of saying ‘Why do men avoid the doctor?’, ask, ‘Why don’t health services make more effort to bring men in?’.

In 2010, the Australian Government launched the National Male Health Policy (in part) to tackle this issue. The policy offers a “framework for improving the health of all males and achieving equal health outcomes for population groups of males at risk of poor health,” the Department of Heath explains. Its release was accompanied by a $16.7 million funding commitment, yet Professor MacDonald claims the policy lacks funding and “teeth”.

Other organisations, such as the Australian’s Men Health Forum (AMHF), are also taking on the need to increase men’s engagement with doctors.

“Men go to the GP and get some two-year-old Women’s Weekly magazine to read. Changing those little things and improving access for men by extending opening hours makes a big difference.”

Some practices, like Dr Darren Katz’ Men’s Health Melbourne clinic, are already paving the way in this area.

“I’ve made my clinic very men-friendly,” the Medical Director and Urologist says, adding there’s “wood, marble and statues”, “TVs playing sport” and “male-focused” magazines. “It specifically targets men so they feel comfortable,” he says. And it seems this approach extends to the consultation.

“First impressions can be quite lasting,” Dr Katz says, explaining that if a hypothetical patient brought up erectile dysfunction and it wasn’t approached in a way that made him comfortable, he could be “turned off”.

“Patients then have problems for years and years because first responses to treatment weren’t as they wanted.

“It’s important to make sure you engage that person appropriately and ensure that their clinical experience is as good as possible.”

Although efforts are being made to encourage the minority of men who might avoid the doctor to make appointments, it seems more work is needed to convince ‘tough’ male stereotypes.

Ethan McMaster, 24, for instance, says he “hates” going to the doctor.

“You go into this white sterile room, and are expected to open up to a person you don’t know, and tell them every detail about your personal life,” the Victorian student says.

“I’d much rather just tough it out and get better on my own."

Mr McMaster isn’t alone, it seems. In fact, Professor MacDonald states: “There’s definitely an element of stoicism in male culture, especially in Australia. We have to create a culture where it’s okay to go to the doctor.”

Dr Katz agrees: “Men have been led to believe the ‘she’ll be right’ attitude, and it’s become the norm.”

However, he says men putting off doctors’ visits can be dangerous. “Most people think if there’s no symptoms, nothing is wrong, and that’s far from the truth.”

High cholesterol and blood pressure are examples of conditions which often have no symptoms, yet can lead to serious health problems, such as heart attacks and strokes. Hence, the recommendation for routine check-ups and screenings.

While men (and women) can’t be forced to visit the doctor, those who need a general check-up or specific problem addressed may benefit from booking an appointment with an appropriate health professional.