Getting straightened out with a new drug for Peyronie’s disease 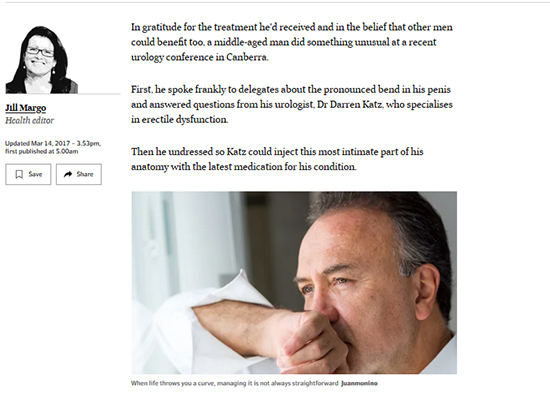 In gratitude for the treatment he'd received and in the belief that other men could benefit too, a middle-aged man did something unusual at a recent urology conference in Canberra.

First, he spoke frankly to delegates about the pronounced bend in his penis and answered questions from his urologist, Dr Darren Katz, who specialises in erectile dysfunction.

Then he undressed so Katz could inject this most intimate part of his anatomy with the latest medication for his condition.

As it was difficult for everyone in the room to see, a video camera was placed close to his groin and the procedure was projected onto a large screen.

The man was protected by a privacy screen and while an assistant surgeon extended his penis, Katz demonstrated the nuances of the injection technique while talking into a microphone.

After being injected in four spots, the man had to hold onto himself for five minutes to prevent bruising, before being wrapped in a semi-constrictive bandage.

Katz, medical director at Men's Health Melbourne, says this man has severe Peyronie's disease, a common condition characterised by a curve or bend in the penis.

Last year a survey showed more than a million Australian men develop this condition in adulthood and the peak incidence is between the ages of 55 and 60.

In some it resolves naturally and disappears, in some it never becomes bothersome but in a third of cases it becomes a distressing problem and can cause much anguish, as it did for this man.

Although willing to appear before some 40 delegates during a workshop at the Urological Society of Australia and New Zealand's 2017 conference, the man asked The Australian Financial Review not to disclose his name.

He lives in a small rural town and said he dreaded the townsfolk learning about his problem.

After his long marriage expired from "natural causes", he was involved in a traumatic car accident that left his entire pelvic area bruised black for weeks.

When it cleared he started a new relationship. But a year or so into it, he noticed a little thickening "the size of two oat seeds" on his shaft.

Over the next months he watched in alarm as his erect penis curved to the side and then appeared to straighten. That didn't last and finally it bowed upwards and remained bent at a 90-degree angle pointing up, making intimacy awkward and painful.

"I stopped initiating sex and tried to avoid situations that could lead to it. It was heartbreaking really. I couldn't respond to advances because I didn't feel like a man any more," he said.

This relationship spluttered to an end and he felt desperate. He had also lost almost an inch in the length of his penis, which he describes as very significant.

After exploring surgery, he settled on a "chemical knife" delivered through injections designed to dissolve the thickened plaque.

The injections contain the drug Xiaflex, which breaks down the build-up of collagen in the plaque. After each session, the urologist bends the penis in the opposite direction of the curvature, hoping to model the plaque and encourage the drug into crevices it may not have reached.

At home, men are instructed to do similar exercises.

Xiaflex was approved for use in Australia last year for men with a curve greater than 30 degrees on erection. After a course of treatment lasting about six months the average improvement in the curvature is about 34 per cent.

Katz says he sometimes recommends the drug to reduce the size of the curve before surgery to provide a better chance of success. For other patients, it may reduce the curve sufficiently to avoid surgery.

But his patient at the conference appeared to have a better result than the average. He was down to 45 degrees at that meeting and says he has since gone down to 25 degrees.

His treatment has come at a cost.

The drug is not covered by the Pharmaceutical Benefits Scheme and from the injections and his travel to and from Melbourne, (his Canberra trip was sponsored by the drug company), he is $10,000 out of pocket.

As he has not had a partner since treatment, he doesn't know how truly successful it will be, but he's hopeful.

While live surgical demonstrations are not unusual, patients are almost always anaesthetised. This man was not the first to talk to delegates and undress.

The most celebrated case took place in 1983 at a Urological Association of America conference when a slightly "odd" British neurophysiologist demonstrated the effectiveness of penile injections.

He stepped out from behind the podium and dropped his trousers to reveal successful tumescence. Then, with his pants around his ankles, he waddled down the stairs, approaching the front row of delegates – ending the session in chaos.

The Canberra session was calm and delegates were moved by the patient's honesty and despair.

Katz, who sees up to 10 new or returning Peyronie's patients a week, says a curve less than 10 degrees is considered normal and usually doesn't hamper intercourse.

Before he offers treatment, he performs a specialised ultrasound to ensure the man has a chance of benefiting.

His injection technique involves four, six-week cycles. The drug company charges $1250 per syringe and he uses two per cycle.

A cycle consists of one syringe used, on day one, to inject into the plaque and at the maximal point of bend, followed by exercises.

The second syringe is administered on day eight and followed by five weeks of exercises.

If a man does not benefit after two cycles, he recommends they stop treatment.

Katz says the biggest risk of using this drug is a fracture in the hard outer casing of the penis. By softening the plaque, the drug may cause a weakness in this casing.

On erection a rupture may occur at the point of weakness. He says this occurs in less than 1 per cent of cases and may require a surgical repair.

More commonly, patients have bruising for a few days which is why he uses a bandage for 24 hours after the injection.

Laurence Levine, Professor of Urology at Rush University, Chicago, an international figure in sexual medicine, was present at the workshop.

He says Peyronie's is an acquired disease. It occurs when a palpable plaque or scar results in a deformity that wasn't there before.

While Levine thinks Xiaflex, the first drug approved for Peyronie's disease, has the potential to do good, it is imperfect.

A trial of 550 men showed a 34 per cent improvement which equated to a 17-degree reduction in curvature.

While this may be enough to make some men functional and might improve the surgical outcome for those with more severe curves, the drug is not useful for all comers.

"There are clear plus sides, but my experience has not been very good. The average reduction in curvature in our first 45 patients was only 5 degrees which I suggest is not clinically meaningful."

"But then we had some patients with a 40-degree change."

So, to which men would he recommend this drug?

"My opinion is men who have mild to moderate curvature of less than 60 degrees that goes up and laterally, and have an easily palpable scar that can be used as a target, are the best patients for this treatment."

Men who have several points of indentation or curvature along the shaft are not good candidates. Neither are those who have extensive calcification in their scar, downward curvature or have erectile dysfunction.

While the rule of thumb is that intercourse is manageable with a curve under 30 degrees, he has patients with 60 degrees who still function.