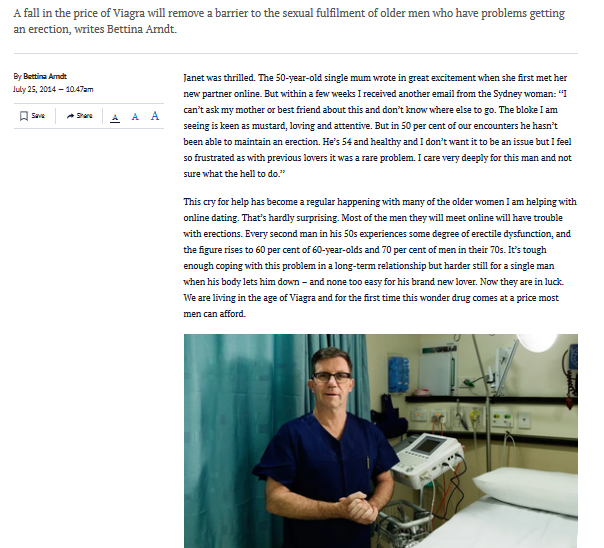 A fall in the price of Viagra will remove a barrier to the sexual fulfilment of older men who have problems getting an erection, writes Bettina Arndt.

Janet was thrilled. The 50-year-old single mum wrote in great excitement when she first met her new partner online. But within a few weeks I received another email from the Sydney woman: ‘‘I can’t ask my mother or best friend about this and don’t know where else to go. The bloke I am seeing is keen as mustard, loving and attentive. But in 50 per cent of our encounters he hasn’t been able to maintain an erection. He’s 54 and healthy and I don’t want it to be an issue but I feel so frustrated as with previous lovers it was a rare problem. I care very deeply for this man and not sure what the hell to do.’’

This cry for help has become a regular happening with many of the older women I am helping with online dating. That’s hardly surprising. Most of the men they will meet online will have trouble with erections. Every second man in his 50s experiences some degree of erectile dysfunction, and the figure rises to 60 per cent of 60-year-olds and 70 per cent of men in their 70s. It’s tough enough coping with this problem in a long-term relationship but harder still for a single man when his body lets him down – and none too easy for his brand new lover. Now they are in luck. We are living in the age of Viagra and for the first time this wonder drug comes at a price most men can afford.

Since Pfizer’s patent for the Viagra drug Sildenafil ran out two months ago, the cost per erection has dropped from more than $16-20 to a couple of dollars. That’s great news for older single men nervous of dropping their pants with a new partner.

There’s plenty who may face this dilemma, with nearly a quarter (22 per cent) of men over 50 currently unpartnered, a total of 737,122 people, according to the latest census figures.

But there are also many married and partnered men struggling with erectile dysfunction which can cause enormous strain on a relationship. I’ve talked to men who’ve lost their marriages when they didn’t know how to deal with this type of problem. Rather than risking failing in bed, the man stays up later and later watching TV, while his partner is lying there wondering why he’s avoiding her – doesn’t he find her attractive any more? Is he having an affair? It’s very easy for such tensions to corrode even the best of relationships. Viagra and the other treatments have proved a real game-changer for many such couples but cost has always been a real issue.

‘‘I’ve seen many men in my practice who told me they can’t afford to use Viagra regularly,’’ says erectile dysfunction expert Michael Lowy who’s been treating such patients at his Bondi Junction practice for more than 20 years, long before Viagra came on the scene in 1998.

A man might think it’s worth blowing $40 a week on a couple of erections but there are many wives who’d far prefer to spend the money on a leg wax or a good night out. With so many more older women going off sex than their partners, the high cost of erectile treatments has been one more barrier facing the husband hopeful of encouraging a less enthusiastic wife into the cot. And this medication takes an hour to kick in which means that even when he has a green light she can easily go off the boil between the time he pops the little blue pill and when he’s ready to trot. Wasting these very expensive erections simply adds to men’s frustrations.

‘‘There are older women very keen to have their love lives continue who are happy to spend the money for this type of treatment – sometimes it’s the man who resists due to cost and confidence issues, to her immense frustration. But I’ve certainly heard from men whose partners object to them spending so much money on something they don’t see as important. Yet erections are very significant to many older men, affecting not only how they perform in bed but their overall confidence and well-being," Dr Lowy says.

That confidence is even more critical for a man who’s been dealing with the stress of cancer. Most of the 22,000 men diagnosed with prostate cancer each year in Australia end up with erectile problems following their treatments. Far too few of them receive the help they need to have any hope of regaining normal sexual functioning, says Sydney psychologist Patrick Lumbroso. He is conducting PhD research into erection problems after prostate cancer surgery and has found very few men are properly advised by their urologists about what they need to do to regain erectile functioning. Lumbroso’s research showed many men had been simply advised to wait a few years and see what happens. But the research now suggests what they need is ‘‘penile rehabilitation,’’ which requires them to be given medications to artificially create erections to help nerve recovery.

This penile rehabilitation process is a major focus of a new Melbourne clinic, Men’s Health Melbourne, bringing together the skills of a leader in the field, Christopher Love, and urologist Darren Katz, who trained with world experts at New York’s Memorial Sloan Kettering Cancer Centre.

Dr Love says there’s now good evidence that regular erections supply vital oxygen to the penis through increased blood flow. ‘‘This helps prevent scarring and keeps erectile tissues healthy until the erection nerves have a chance to recover,’’ he explains. Erection pills like Viagra, or the alternative drugs – Cialis or Levitra – can play a vital part in helping the healing process, says Dr Love.

‘‘They usually won’t give the man erections at this stage in their recovery and most men need injection therapy or a vacuum erection device as well, but the use of drugs like Viagra very regularly after prostate cancer surgery has been shown to increase the chances of return to normal erections.’’

The research evidence now suggests what they need is ‘‘penile rehabilitation,’’ which requires them to be given medications to artificially create erections to help nerve recovery.

Dr Love reports the high cost of the pills meant many patients were reluctant to include them in the treatment program previously, but now that’s likely to change. ‘‘We’re delighted that low-cost Viagra is now available which may enable more men regain their erections, by helping prevent penile fibrosis and other changes, including penis shortening, that can occur after cancer surgery.’’

It will be interesting to see whether companies producing the two other erection pills, Cialis and Levitra, will now lower their prices to compete with Viagra. There’s actually no predicting which drug works best for any particular man. Researching this issue for my book, What Men Want, I was struck by the great variation in the response of men to these slightly different medications, with some finding one more effective or having fewer side-effects than the others. One man found Viagra resulted in a stuffy nose and mild headache. Cialis had fewer side effects and worked for a longer period (more than a day or two compared to a couple of hours) but he found it took him longer to get a response and preferred the predictability of Viagra.

Another man had tried all three drugs and found Viagra caused too many side effects including blue vision, Levitra resulted in a painfully hard erection but Cialis worked well for him. Others will find none of the pills work for them and need to try other approaches, like injection therapy, vacuum devices or a penile prosthesis. Andrology professor Doug Lording has been working in the area for more than 30 years and has many patients who have been on Viagra now for more than a decade.

‘‘I’ve never seen a single serious health problem associated with the Viagra use,’’ he says, while stressing there are men with medical conditions who can’t use Viagra, such as men using nitrates for angina.

As Professor Lording explains, the miracle of Viagra wasn’t just the impact it had on the lives of millions of men and women across the world but the role this hugely profitable drug had played in inspiring proper research into the amazing physiology responsible for erections and how to fix it when it goes wrong. One critical discovery has been that the penis is the canary in the mineshaft, with erection problems heralding the onset of blood flow problems that can lead to heart attacks or strokes. That’s one very good reason why men‘s sexual health needs to be properly monitored.

It’s shocking that with so many effective treatments now available there are still organisations making millions of dollars each year signing men up for expensive treatments that don’t work. Hopefully the new cheap Viagra will inspire more men to seek out proper medical help.