A Closer Look At Men’s Fertility, Because It’s Not Just About Women 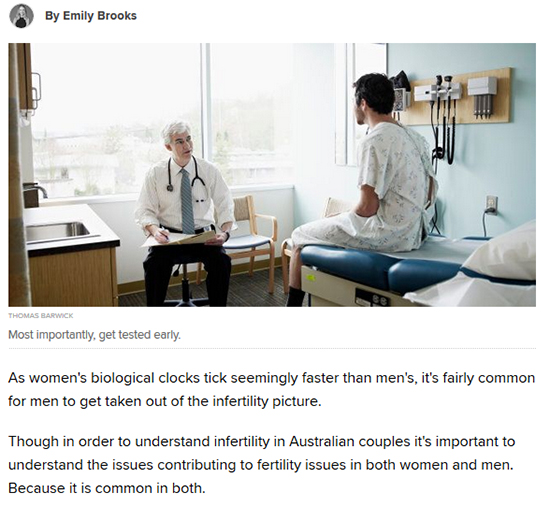 As women's biological clocks tick seemingly faster than men's, it's fairly common for men to get taken out of the infertility picture.

Though in order to understand infertility in Australian couples it's important to understand the issues contributing to fertility issues in both women and men. Because it is common in both.

"It's the woman who carries the baby and she's the one who is pregnant. By default, they often think it's a female factor, but the causes of infertility are equally spread," Katz told The Huffington Post Australia.

So here's what you need to know about infertility in men, and how it can best be addressed.

Infertility Isn't Always The Women's Fault (Actually, It's Only Half The Time)

Men's infertility is a problem more often than most couples realise.

"The female goes through a whole gamut of tests and the male is often unfortunately is left behind in all of these".

"So when you look at that it's actually pretty equal in terms of whether it's a male or female factor."

Unfortunately the man is often initially overlooked which means successful treatment is delayed for the couple.

"What's happening, for whatever reason, is that it's always the female's fault. The female goes through a whole gamut of tests and the male unfortunately is left behind in all of these," Katz said.

"Her results come back normal -- very commonly -- and often it shows up he has the problem which should have been checked from day one."

Men Should Get Tested Earlier

Infertility guidelines recommend both the male and female should undergo fertility tests at the same time.

So when is the right time?

A couple should be trying to conceive for 12 months before they can be considered infertile. This means sex without contraception, timed around the woman's ovulation. If there's still no positive pregnancy sticks being waved in the air, couples should consult their doctor for testing at the same time.

For men the tests are fairly non-invasive and "very simple", according to Katz.

"It's essentially just blood and semen tests, and that's it," Katz said.

"I've seen patients, unfortunately, where the female has gone through all these tests and then this guy has got no sperm. And no one ever looked, no one ever checked. Male infertility is a significant cause of couples' infertility and males need to be tested at the same time as the female."

Lifestyle Factors Do Play A Part (Including Steroid Use)

A range of lifestyle factors can impact men's fertility, including smoking, excessive alcohol consumption and obesity. Gestational diseases can also potentially cause fertility issues for men as well as sexually transmitted diseases such as chlamydia and gonorrhea.

But men hitting the gym and taking steroids are also putting their fertility at risk, with the testosterone taken in steroids causing men to have fertility problems and in some cases become infertile.

"One thing I see quite a bit of in my clinic is actually the gym junkie," Katz said.

"Usually when you stop taking the steriods the infertility can be reversed, but a lot of these gym junkies don't know that".

"Usually when you stop taking the steroids the infertility can be reversed, but a lot of these gym junkies don't know that," Katz said.

"They're just looking to put on muscle very quickly, so they take testosterone and other types of steroids. The problem being, is that, what that actually does is switch off the testicle. If you actually ask these gym junkies -- who have these massive pecks, big muscles, massive thighs -- they've actually got very small testicles."

Dr Katz said the majority of the time, men regain fertility but it can take between six to 12 months. However, there are some cases where men remain infertile.

Infertility Can Be Reversed

There are two main causes of infertility in men, which can sometimes be reversed.

In some cases the male is unable to produce sperm, while in other circumstances the male might be producing sperm, but have a blockage. By identifying the issue through a fertility check, men can then visit a specialist to investigate the appropriate treatment pathway.

"There can sometimes be pretty simple things [done], like treating a varicocele," Katz said.

"It's one of the most common causes of male infertility and by treating it you can make a patient fertile, from infertile".

"It's one of the most common causes of male infertility and by treating it you can make an infertile patient fertile."

The surgeon said over the counter treatments are also available for some men dealing fertility issues. However, over-consumption of these treatments can sometimes lead to further infertility problems, so it's important check in with a doctor first.

Men Do Have A Biological Clock

From the age of 40, men's biological clocks start to tick faster with sperm counts declining, making it a little more difficult to conceive.

"But it's really only about the age of 50 or so where you can have some implications in the offspring," Katz said.

These implications can include conditions such as autism, schizophrenia as well as certain chromosomal problems. The relative risk of a child developing one of these conditions does increase significantly (from a statistical standpoint), but the absolute risk of this happening still remains low.

"It's important to understand a lot of these are just small, absolute increases although relatively it increases things a lot," Katz said.

The best methods for men to increase fertility chances, are to take care of themselves through those lifestyle factors and conceive at a younger age. But the most important thing is to get checked early, because negative results don't mean fertility is out of the picture.